The sad reality of today is that all the programs we rely on are vulnerable to some sort of attack. A good chunk of computer science academia is trying its best to figure out what we need to do to to be able to write secure programs. On top of that, there's an industry full of companies building products and services to help deal with broken code. Despite all of this effort, clever hackers still find mistakes in our code and ways to get around our defenses.

A lot of us in the industry (myself included) feel like we are waiting for some kind of technical innovation or scientific revolution that will finally make it cheap and easy to write correct programs. As soon as we make the discovery, the technical aspect of hacking will no longer be a problem, and we'll be left only with the human aspects of security (social engineering, phishing, etc.). Some of us even optimistically think we'll find technical solutions to those problems, too. But are the breakthroughs we hope for possible, or are we stuck with the status quo forever?

Two visions of the future

I have two extreme visions of the future, and there's a spectrum of possible futures that lie in between the two. The first vision is that our dream comes true: we discover some algorithm or prove some theorem that makes security easy. We finally "figure out" how to write correct code, and after we rebuild all of our systems to work within the new framework, we won't have these problems anymore.

The second vision is that our dream is fundamentally impossible in the sense that there are provable mathematically-rigorous limitations on our abilities to write secure programs. The worst outcome might be that, for the kinds of things we want to use computers for, "secure" programs simply don't exist (a mathematical possibility). Less worse, the concrete computational complexity of writing secure programs might be astronomical.

Reality lies somewhere in between these two extremes.

The obvious place to start is with computability theory. It's undecidable whether an arbitrary computer program is correct. It's undecidable whether an arbitrary computer program contains a vulnerability, even for very narrow definitions of vulnerability. So, following this reasoning, should we conclude that we're in the second kind of world and just give up? No! Just look at how much value we get from using computer programs even though we're not certain they're correct. The fact that Excel has bugs in some of its macro functions doesn't mean companies can't make effective use of it to calculate their employees' payroll. To get around the undecidability barrier, we need to look at the problem differently.

A caricature of the software development industry

Let's draw a caricature of how the software development industry works. As every student learns in their "Introduction to Software Engineering" course, there are different people involved in the process of developing a computer program. They sometimes go by different names, but we'll call them,

The users want a program p for which F(p) is true and S(p) is true, but what they actually get is a program p for which Q(F, S, p) is true. If Q isn't good at checking F and S, then there's a good chance they're not getting what they want. Even today we often conflate Q(F, S, p) with F(p) and S(p) actually being true, i.e. we use programs as if they are correct and secure, even though we know they probably aren't... at least we're taught otherwise by getting hacked.

F and S are intuitive fuzzy concepts. The whole difficulty of programming is turning the fuzzy F into a formal, concrete, highly-specific set of rules to implement something that's "F enough" to satisfy the users. Same for S, nobody's ever written out a complete formal definition of "security." We just have to hope that everyone's intuitions about the problem, shared through the English language (or whichever language you speak), ends up being good enough.

Let's think of the developers as darts players, and let's lay out the space of all possible programs on a dartboard. Upon seeing F, the developers will choose a particular approach to solving the problem. They will pick a language to write the program in, draw up a design for the internals of the program, select the algorithms they're going to use, and so on. The chosen design space will be our dartboard. Behind the dartboard there's a backboard (full of nonsensical programs) to protect the wall from errant darts, but the developers' darts almost always land inside the circle: 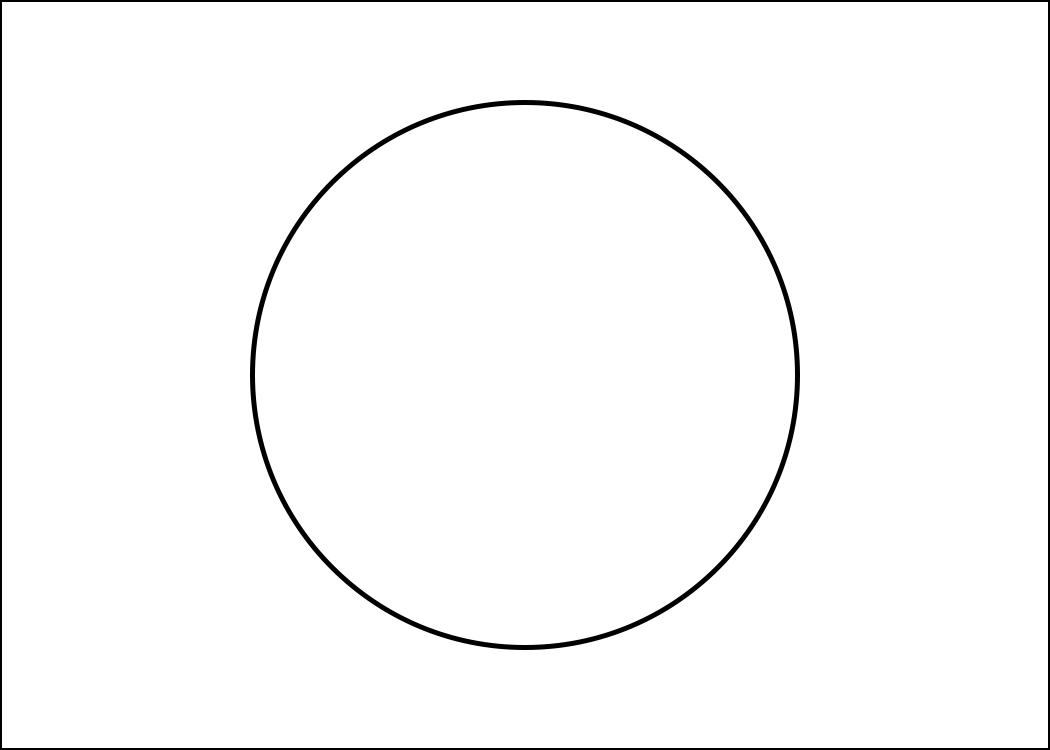 The bull's eye of the dartboard contains the programs that are really correct and secure according to F and S: 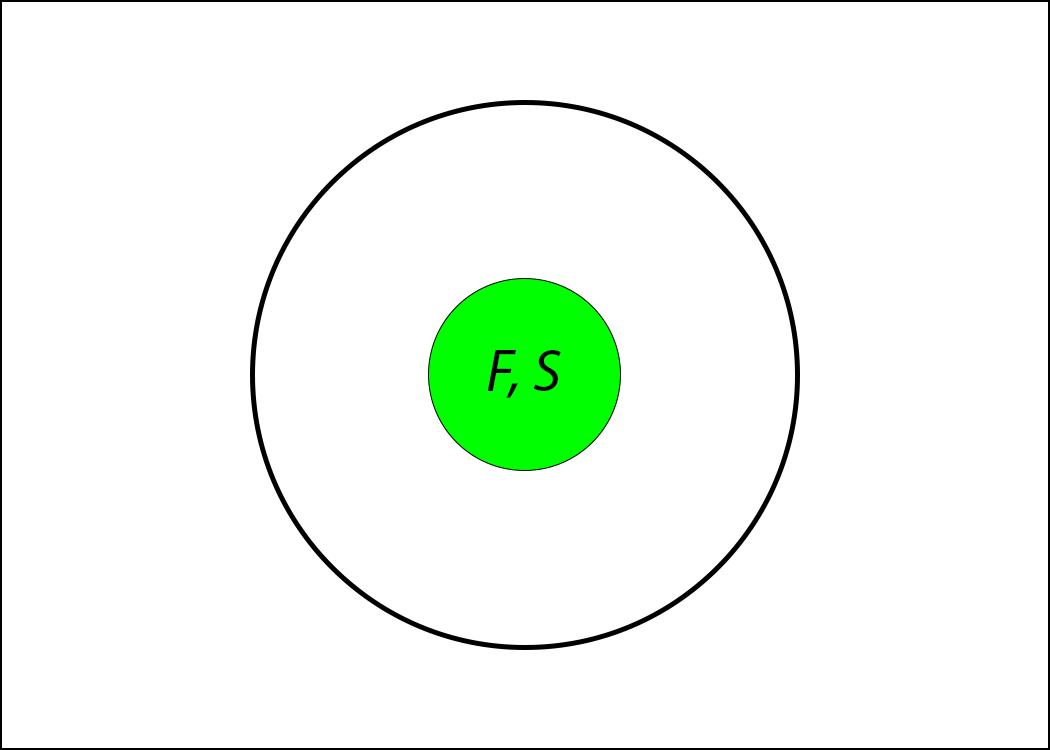 The region around the bull's eye is partitioned into into three areas: 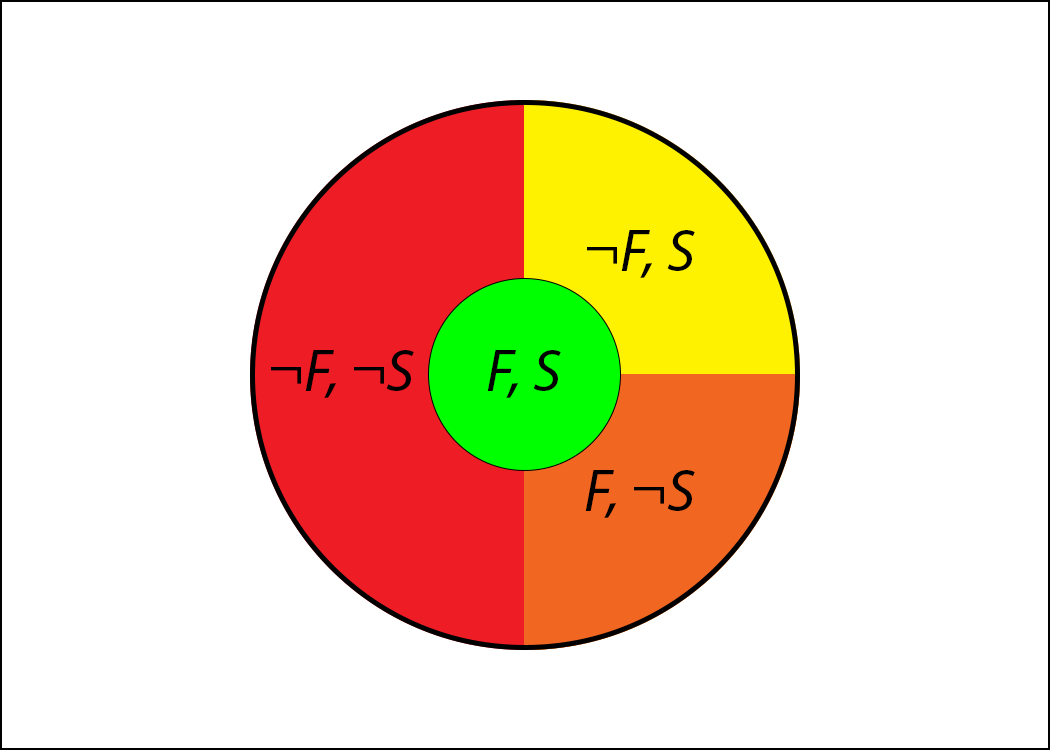 Containing the bull's eye is the "circle of acceptance", which are all the programs that will pass QA's test and be deemed ready for production use. Of course, QA isn't perfect, so some incorrect and insecure programs slip in: 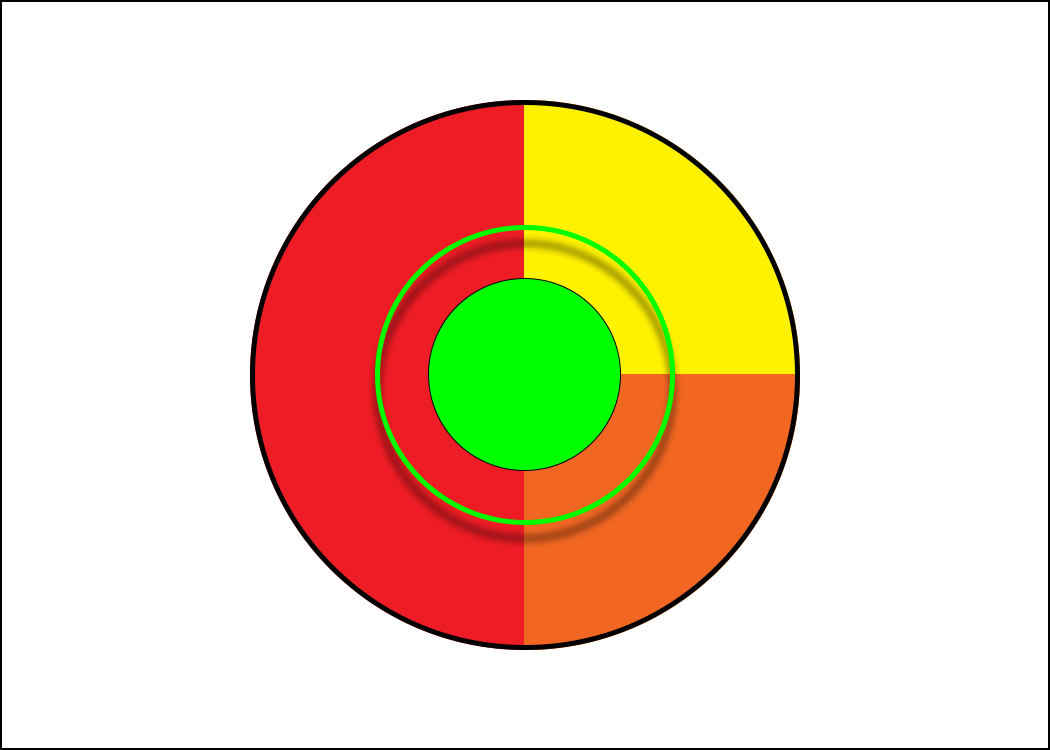 The act of software development consists of throwing a dart at the board, trying to hit the bull's eye. We're not terrible darts players, so programs near the bull's eye (almost-secure and almost-correct programs) are more likely than ones far away from it. The probability distribution over where the dart lands might look something like this:

How do we improve?

The first step is to make sure that there really is a bull's eye. Humans are excellent at holding on to contradictory ideas without ever realizing they're in conflict. Quite often, our intuitive F's and S's contradict each other but we don't realize it. For example, "a super-optimized processor that makes the most efficient use of its time and energy" satisfying the security requirement "processes must be isolated from one another" is flatly contradictory, but decades after the invention of the microprocessor, we're only just now realizing it thanks to side-channel attack research.

Once we're sure that there is a bull's eye, we want to make it as big as possible relative to the dartboard. The more dartboard the bull's eye encompasses, the more likely the dart throwers are to hit it on their first try. If we zoom out and look at the entire backboard, we'll find other dartboards corresponding to different design decisions. For example, one approach is to use the PHP language and mysql_real_escape_string() to escape data for insertion into SQL queries, and another approach is to use prepared statements in the Rust language. The latter's bull's eye will be easier to hit. There are lots of different design spaces and each one has a different sized bull's eye: 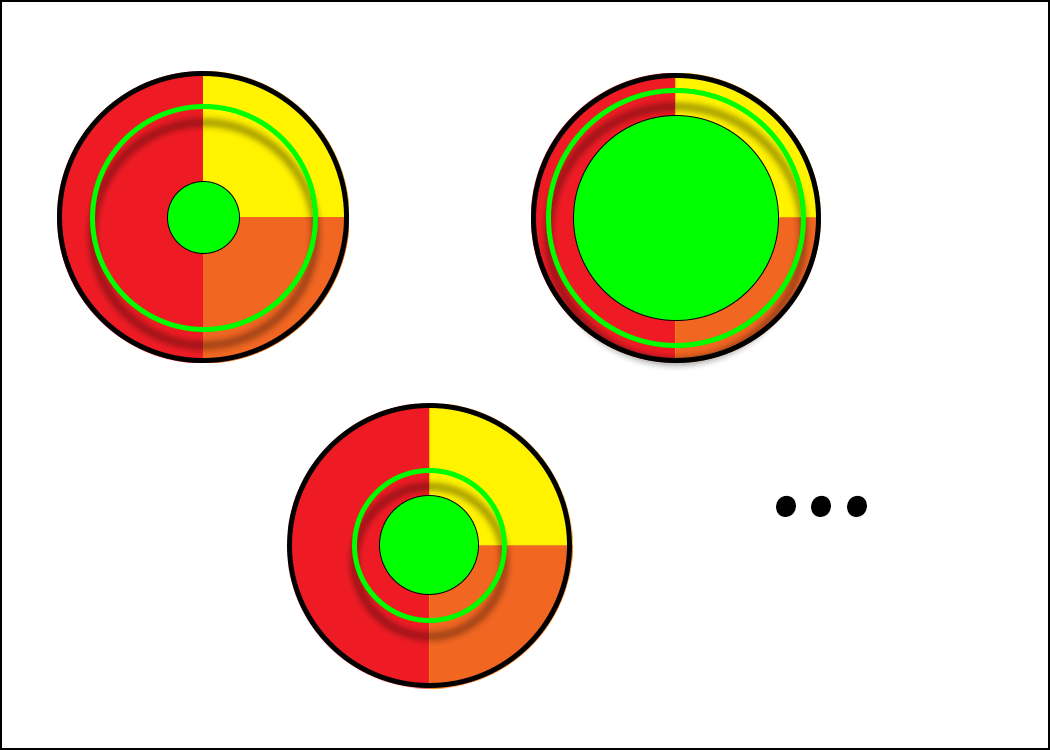 The problem with making the bull's eye bigger is that every developer has a comfort zone. They're better at working in some design spaces over others. It costs money to transform a PHP expert into a Rust expert, and it can't happen overnight. So how we make the bull's eye bigger has to be in line with our economic reality.

We can try to be better dart throwers. Maybe, through better education and aligning of economic incentives, we can produce developers that can hit those tiny bull's eyes and businesses that are willing to pay the price for secure software. My prediction is that we're unlikely to see technological breakthroughs here. We'd need to see massive advances in cognitive science to have any hope of teaching someone how to program in C++ without also making them ultra-likely to write programs with memory corruption vulnerabilities. Becoming better dart throwers boils down to recognizing when the bull's eye we're going for is small and investing massive amounts of time and money into making sure it gets hit:

The last way we can get better is a bit of a cheat: change the problem. We can talk to the users and convince them that their F and S are too hard, and if they could only be happy with the different F' and S' then we could actually give them what they want. Alas, this won't be possible in general. We use computers because of the value they provide, and we can't just rearrange the way our whole society works so that the problems we to solve are easy to program.

Now that we have a nice picture in our minds, let's return to the question of whether or not we should expect to see some kind of holy grail security breakthrough in the future.

So, which world do we live in?

The darts analogy tells us what questions we need to answer. Ultimately, we want to know whether there is a dartboard (a design space) with a bull's eye big enough for us to hit every time. The three questions we need answers to are:

It's easy to find research towards answering the latter two questions, and it's harder to find research towards answering the first. That's not really surprising, given that the first question goes beyond pure math and involves human subjects. If you've done any security research, I encourage you to take a moment and think about which of the above questions your research has helped to answer.

We optimistically hope that we live in a world like the first kind, where a breakthrough will fix all of our security problems. But that's only the case if all of the above questions have a favorable answer. We try our best to force favorable answers, but perhaps we've been too optimistic. My personal opinion is that we need to try harder to supply unfavorable answers. Without an understanding of our limitations, it might be like we're all running on treadmills without realizing it. We think we're making progress towards a breakthrough without realizing we're going nowhere. I want us to look for unfavorable answers to the three questions.

As an example, and to clarify what I'm advocating for, the research I'm imagining would try to prove something like a "typo theorem." A typo theorem would say...

In all known Turing-complete programming languages, all secure programs implementing functionality F are a "typo" (small source code change) away from being insecure.

In principle, someone could write down a formal version of this typo theorem and take a shot at proving it. Who knows, it might even be true!

We should move forward with optimism, hoping that one day things will get better. But we should not have blind optimistic faith. For all the effort we put into making things better, we should be putting at least half as much into showing that we fundamentally can't. We need to go beyond breaking individual defense mechanisms and show that all defenses of certain kinds will fail. By doing this, we'll get a much better appreciation for the hard problems we're up against, and it's the only way we'll ever stop putting forward "solutions" that don't really help.

I'm curious, what do you think? Are you holding out hope for big breakthroughs? Or do you think that the status quo is pretty much it, modulo minor improvements? You can leave a comment below.

Friday, January 13, 2017. By Taylor Hornby In Security and Cryptography.