You awaken, feeling rather groggy, to find yourself in a narrow hallway. It seems to extend off to infinity, you can’t quite make out if it ends or not. On the left-hand wall there is a sequence of evenly-spaced doors. Each door is apparently numbered in order, starting from zero. As you walk down the hallway, you notice that the numeric characters become smaller and smaller in order to accommodate larger-and-larger numbers on the identically-sized placards.

Thinking nothing of the strange situation you are in, you decide to enter door seven, the one that happens to be beside you at this particular moment. Inside, it’s pitch black, but there’s a cord hanging from the ceiling illuminated by light from the hallway. You pull the string, and a light directly inside the room turns on. It’s followed by another a bit further down, then another, and another in a sequence of lights illuminating down what you realize is yet another hallway. The hallway continues so far into the distance that you can no longer make out individual lights turning on, just a blur of ever-increasing brightness.

To your left in this new room, you find a series of cabinets. On the cabinet doors are inscribed markings, totally inscrutable to you. You’re intrigued, since the markings seem to be packing more and more complexity into the same amount of space as the hallway extends, reminiscent of the decreasing font size of the numbers on the main hallway’s doors.

You take a number of steps forward and open what you later counted to be the eighth cabinet from the door, which stood out to you because of its substantial signs of wear. Its hinges are cracked and its handle almost worn off, looking as though it had been opened far too many times before. The exact shape of the symbol on its door isn’t quite possible to reproduce here, but it looked something like,

You open the cabinet’s creaky door to find some parchment, heavily worn, with an even stranger symbol drawn on it, 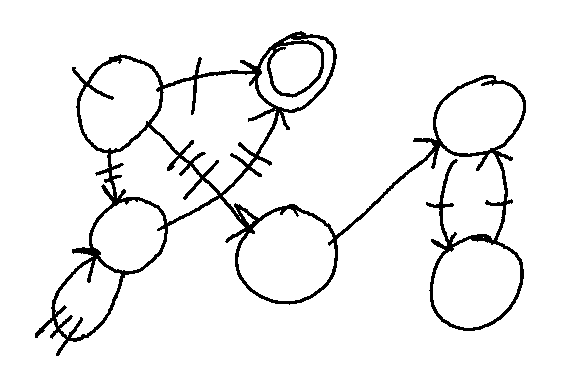 Above this symbol is a number, “107”, written in the very same typeface as the numbers on the main doors. You open an adjacent cabinet, the one to the right labeled ♆, which is much less worn—only the eighth cabinet seems to be worn—to find more parchment. This time, the parchment reads, 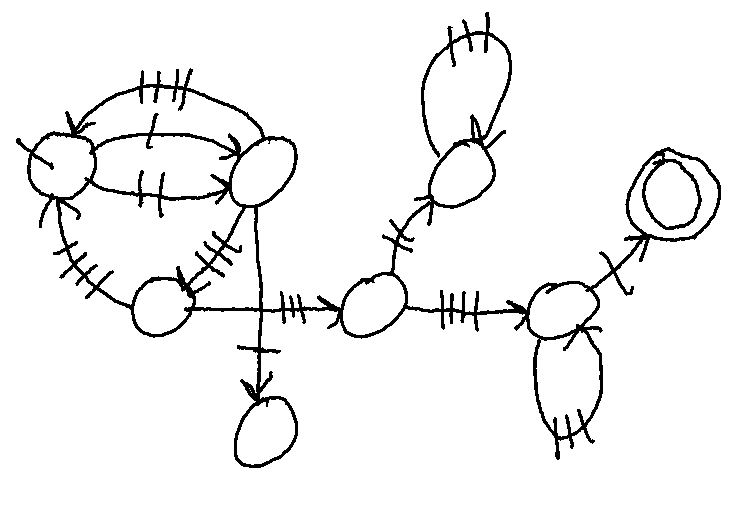 You can’t make sense of what the symbol means, but it has above it the same number again, 107. You open a few more cabinets nearby, the ones labeled ♃, ♄, and ♇, and confirm they too contain parchment beginning “107” followed by similar-looking symbols of wildly-varying complexity.

Curiosity begins to overcome you. You start to think. “The number 107 must have some kind of importance”, you reason, “for it to be written on all of these sheets of parchment.” “In the main hallway, there must be a door with this exact number written on it! That’s what this must mean!”

On your way out of the room, you pull on the light-cord again and a sequence of blackness descends down the hallway. The far-off distance begins to dim as you head towards door 107.

Some moments later, you arrive at door 107. You swing the door open to reveal another light-cord and, after waiting a brief moment for the illumination, you see what at first appears to be a duplicate of the hallway in the last room. As you begin to worry you were wrong about the meaning of “107” and that the long walk here was pointless, you notice that the symbols on these cabinets’ doors are all of the same strange form that you found on the parchment in room seven! The first cabinet to your left reads, 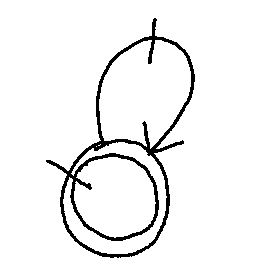 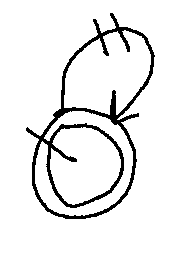 Once again, the cabinets’ symbols grow in apparent complexity the further down the hallway you go, but shrinking so that they never take up more space. “I must be able to find one of the symbols I saw in the previous room!” you think, but you quickly realize that the symbols you saw before were far too complex. In this ordering, they would be miles and miles into the room, if they could even be found here at all.

You decide to walk down the room anyway to see if you can find an end. A considerable distance down the hallway, you find yet another heavily-worn cabinet standing out from the rest. By this point, you’ve lost count of exactly how many cabinets you’ve passed, but it must have been a little over a hundred, and the room still seems to have no end.

You open the disheveled cabinet, and inside you find not parchment this time but a vial, a vial full of dimly-glowing fluid. Written on the vial is another number, this time a much larger one, 18408600335515421047. “This is probably another door-number,” you think, “but I could never make it there.” In an adjacent cabinet, you find another vial of fluid, but the fluid is glowing so brightly that it burns. You slam the cabinet door shut to protect your eyes, but not before catching a glimpse of the same large number written on it, its afterimage now fading from view.

Still in a state of curiosity, you leave the room and decide to enter a random door nearby. Inside are the same cabinets again, but this time instead of labels, small cages are affixed to the cabinets’ doors. Inside the cages are bright-orange birds with curled beaks, fed by automatic feeding machines. The birds are chirping, and the cacophony of the room is almost deafening. You make out that the first bird is silent, the second chirps repeatedly, and the third is making bursts of double-chirps, but stepping any further into the room is too loud, so you leave.

Now beginning to worry that this is all too weird, you run down the hallway towards where you began and open doors haphazardly in an effort to find out just what is going on. Behind door 97, the cabinets are again labeled with what look like polynomials, but their insides are black voids with blotches of light that appear to be spiral galaxies in the far-off distance. In 67, the cabinets are labeled by grids of putrid, decaying biological matter. “This is insane!” you say out loud. “What is this place?” In 47, the labels are jars of pebbles. You’re glad that it’s something sane this time, but inside the cabinets you find unfamiliar machines whirring away!

Finally you come to 37 where you find cabinets labeled by ordinary numbers, written in strange hard-to-read fonts. The reassurance of finding somewhat regular numbers is quickly interrupted as you open the first cabinet to find a miniature human, chained to a screw driven into the bottom, screaming “seventeen! seventeen! seventeen!”.

Now horrified, you run out of the room and sprint towards door zero, hoping for a way out of this awful place. In your state of panic, you realize that you have no memory of how you got here nor do you have any recollection of events from your past. “This must be a dream! This has to be a dream!” you scream out loud, but you can’t find a way to wake yourself up. You fly past doors in reverse order, passing 11, 10, 9, 8, … frantically searching for a way out.

At the end of the hallway, just past door zero, you see an opening with no label. “This must be the exit!” You rush toward it and fly through without giving it any second thought. Suddenly you find yourself weightless and drifting. The hallway is now behind you and quickly receding into the distance. It’s black. There are no other buildings or structures, no world, not even a surface. There is nothing but a dim glow from the now-faraway hall, and precisely seven stars in the sky.